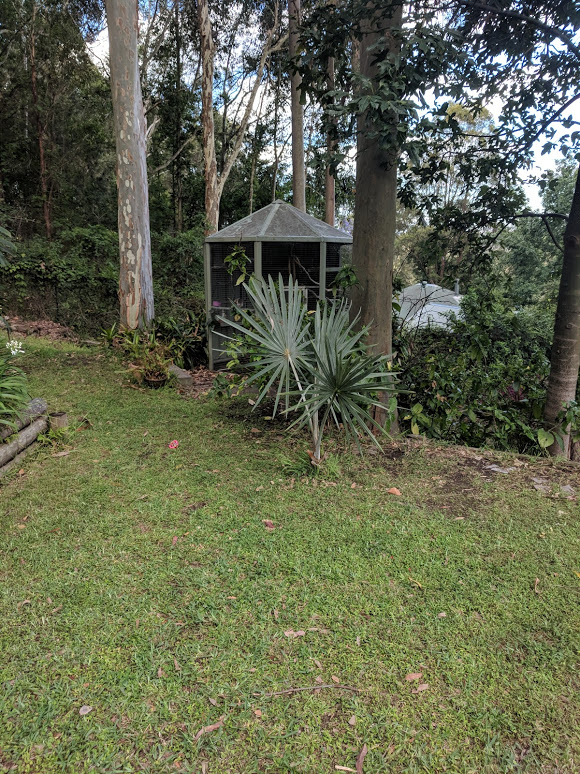 There are so many jobs around the garden we haven’t even begun to contemplate, however, the old Aviary was becoming a focal point for me. I’m thinking ‘easy wins’ here.

“It shouldn’t take too much to clean that out. Then we can decide what we do with it.” I decide one hot Sunday. The idea grows in my mind and by the time the hottest part of the day has passed I’ve donned my Barmah and found a pair of gloves. The attire was more of a psychological requirement than a physical one. Who knew what beasties lurked in the old Aviary.

I gingerly opened the door waiting for sudden movements or scuttling sounds, but so far so good. I got brave and walked inside whereupon my skin immediately began to creep. Webs upon webs upon webs hanging from everywhere. Uugh.

“Be brave,” I tell myself -but my bravery is not my strong point – and it’s certainly not bolstered by the sight of the skeletal remains of large spiders (OK, OK I know technically spiders have exoskeleton but you get the idea).

“What the hell was big enough to kill those monstrosities?” I wonder.

I decide more equipment and reinforcements are required. A broom with a very long handle and a hose set on ‘Jet’. For some mad reason, I also thought Angus would love to join in though he’s still too young to be trusted in the garden off leash. So stake in the ground, lead looped over, Angus in situ and part of the team.

I begin shovelling the moss out from the bottom of the Aviary and dumping it on the concrete. The inside of this Aviary is like a museum dedicated to old bird food and a range of rusting containers. Once I remove as much as I can stand (remember I’m standing in a mass of webs here) I jump out and turn my attention to the hose.

As I spray the Aviary with as much gusto as the hose can muster, the pup becomes excited. And not in a good way. He’s still not a massive fan of the hose or water for that matter – it’s a very slow work in progress socialising the concept with him. ‘One does not get one’s paws wet.’ He jumps around madly and frees himself from his stake and decides he would like to eat the weeds already pulled from the garden earlier that afternoon.  Of course, anyone who has a pup knows you must never chase them when you want them to come to you because they think ‘hey this is a brilliant game. I’m going to take off at great speed in the opposite direction.’

It’s not long before I realise it’s an extremely bad idea to get Angus’s support in the Aviary. He just wants to eat grass, weeds and wallaby poo for heaven’s sake. He doesn’t get his last booster until next week so I am still anxious whenever he sniffs or picks anything up he shouldn’t – even if it is in our garden. 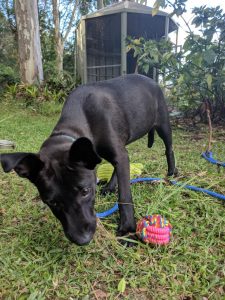 At least we both understand the value of the bribe (though for how much longer I’m not sure). Angus and beef treat now safely back in the boring confines of his playpen (thank God he hasn’t mastered jumping out of it yet) I’m back to the horror of the Aviary.

The jet hose was surprisingly ineffective. These flamin’ webs are holding their shape like chicken wire so I have to move to plan B with the end of the broom. Needless to say, my skin is crawling.

And then it happens. Something huge leaps at me from behind one of the old bird boxes. I scream so loudly Peter’s rushes to the driveway wondering what injury has befallen me.

“I’m fine …I’m fine …it’s just … it’s just a beastie.” At this point, I am holding the broom between me and the thing.

It turned out to be a huge Cricket – a mutant Cricket. It had probably lived in the Aviary so long it had become hermit-like and was putting up a fight. He didn’t want to be moved on that was for sure. I decide a break is in order. I need a coffee. Perhaps I’ll pin an eviction notice on the Aviary and give him until tomorrow to move out on his own.