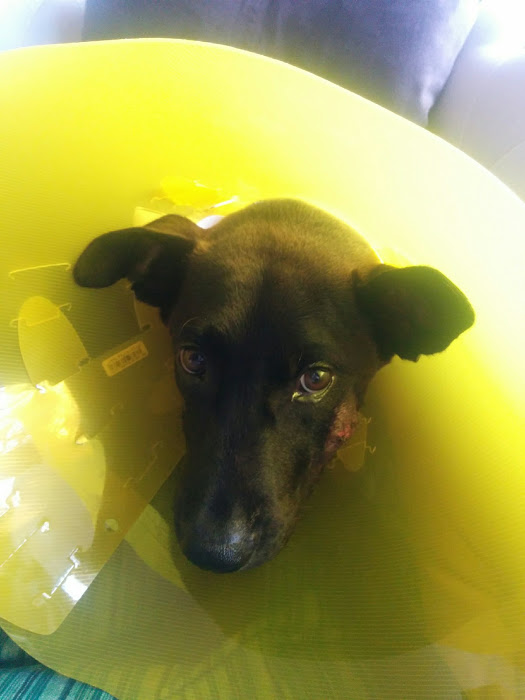 Angus saw out the New Year through a haze of drugs and a little less rock and roll. It must have been about 10.30 at night when out of the darkness came a frantic yelping. We ran through to his crate and comforted him while frantically looking around for the beastie, spider or (God forbid) snake that inflicted the bite or sting. Nothing. Had he eaten it? What the hell was it?  He was still whimpering as though he’d had a bad dream but apart from that, there didn’t appear to be any signs of injury.

The next morning the whole side of his face had swollen dramatically. Whatever had caused him to yelp had attacked viciously but he still seemed to be his normal self so I didn’t worry myself unduly. Whatever it was he’d got his own back by eating it so hopefully, the swelling would go down in a day or two. That afternoon I took him to our usual pet store to buy food. The girls in there always make a fuss of him but there were treats aplenty when they saw his swollen wee face. One of the girls noticed a little orange fleck sticking out on his chop so she gently pulled it out. It was hard to say what it was but it looked like a tiny quill. She then pulled at a couple of other suspicious looking protrusions but they could have been hairs for all we knew. There was nothing obvious. He didn’t seem too perturbed and just wagged his tail in the hope for more treats.

Day two, however, was a different story.  Mornings are normally noisy affairs with by me hiding under my covers until he finds me (Angus that is). It normally results in lots of flailing paws, play barking and general high energy shenanigans. This particular morning, he padded into the bedroom and rested his head gently on my bed and looked up at me with those big black sad eyes. He was in pain and making whimpering crying sounds. Even though the swelling from the lower half of his cheek had gone down the swelling under his eye had grown even larger.

The Vet was no help really. She shaved his cheek, stuck a needle in the lump to draw some blood and stuck a thermometer up his backside. Poor pup. He somehow managed to wag his tail through it all and just be a general amazing little guy. I felt the tears prick my eyes when I saw blood run down his cheek. Each time I visited the vet it was like taking my baby for a vaccination – you know that feeling when you’re the one holding them in position as someone else jags them with a big needle? We came away from the Vet a few hundred dollars poorer and stocked with antihistamines and antibiotics. The blood test had been inconclusive so she’d taken a biopsy to send away if the lump didn’t improve. We still had no idea what we were dealing with.

“Bring him back in immediately if his face starts to ooze,” was the final instruction.

Things didn’t really improve and to cap it all the lump had been itchy so Angus scratched the top of it to reveal a large weeping mess. Did this class as ooze? That night (on New Year’s Day) about midnight his breathing changed and he became hoarse and laboured … and that’s when I felt a lump on his neck. I went into panic mode again worried something else had bitten him and perhaps the swelling was closing his airway.  Sitting in the Animal Hospital at Midnight on New Year’s Day was not part of the plan but poor Angus was struggling.

Again we were sent on our way a few hundred dollars poorer with instruction to take him to the Vet for surgery in the morning! The swelling was his glands kicking into overdrive to counteract the infection caused by whatever got him.

You have to understand during the whole sorry episode, I was stressing out about Angus as if he was my first born – I was well aware of that – I just couldn’t control the protective mother mode. On the other hand, Peter was being Mr calm, cool and collected and insisted Angus was fine (infuriatingly so).  I was battling with knowing I was being overly protective yet wondering if I was actually right to be concerned and of course the continuous expense of the Vet was a stress building in my mind too. I suppose if we actually had a definitive answer as to what the problem was I would have been fine.

So the next day we trot off to the Vet again. Angus is still sad and whimpering so the Vet finally says, “I think it’s time we took a closer look. The swelling should have gone down by now”.

They sliced his cheek and flushed out his wound with saline. They examined his teeth and x-rayed the roots. And what did they find? Nothing! So they put two stitches in and left the wound open to help drainage in case there were foreign bodies trapped somewhere.

So now he has to wear the Cone of Shame and he looks at us like we are the cruellest humans that ever walked the earth. “You rescued me from the RSPCA for this? Thanks for nothing,” his black eyes seem to say.

I’m sorry little guy … I wish I could take the pain and the stitches and even the cone for you … but a few weeks from now I’m sure you’ll have forgotten all about it and you’ll be back to bounding all over me in excited fashion in the mornings.

Roll on the 12th January when we can get rid of the stitches and the cone – all in a oner! Here’s hoping!