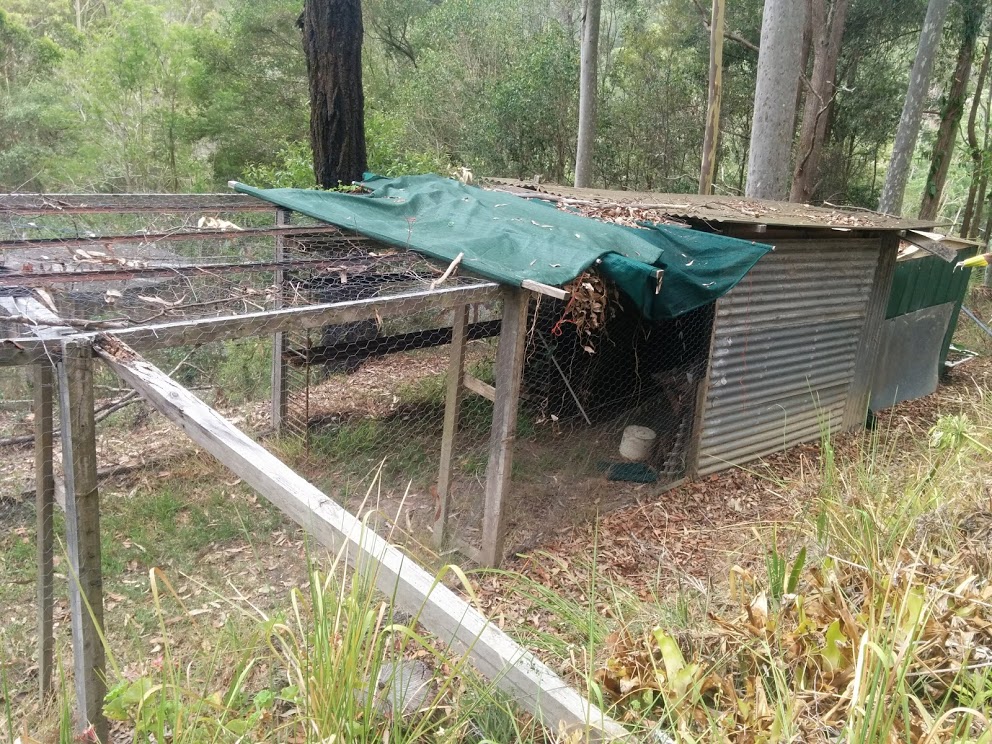 There are two projects we really must get a start on. One is suitable fencing for Angus and the other is to figure out what we’re going to do with the ramshackle chicken coop that seems to be held up by willpower alone. There is a tin shed wedged between the chicken coop and a slightly newer, though badly damaged metal shed. Beside this, there is an old bath filled with water, plants and green gunk. I figure just by knocking this all down we are going to significantly improve the value of the whole property – it’s so uncared for.

As far as the fencing goes, the perimeter fencing around the property seems pretty secure so it’s more a case of creating a fenced area where Angus can run freely without getting himself into too much mischief. To the right side of us, the neighbours have chickens, an alpaca and a dog, while the neighbours down the drive have a rather cantankerous German Shepherd (the one that doesn’t like people or other animals – or life in general by the sounds of it). I think our nearest neighbours on the left have just said goodbye to their own dog recently though of course, they may get another one soon. The next nearest neighbours have cattle and horses. This is pretty good news for us because aside from the property boundaries, our neighbours have made sure their respective animals/livestock can’t break out. All we have to do is designate an area for Angus where he can’t eat poisonous plants or do his own creative landscaping – and – when the time comes keep him from trying to herd the chickens too much.

After a quick measure up and a trip to good old Bunnings to price some options we think we’ve got a handle on what needs to be done … until I spied wood and various rolls of chicken wire in the chicken coop.  This in itself sorted the priorities between the two projects.

The timing was good. I had spent a couple of weeks feeling very frustrated with my lack of progress in any of my writing/business projects. My motivation seemed to have melted in the searing heat and humidity of an NSW, Central Coast Summer. What better therapy than to get outside and get my hands dirty… hmm … did I mention the heat?

Still, when I decide to do something, I want to get on with it there and then. Patience is not my middle name. On with the big hats, thick gloves, hard boots –shade and ice drinks on standby. It was hot, dusty work, not to mention a bit scary, walking into the unknown in the deepest recess of the chicken coop. Either it was going to fall down around my ears or I was going to find something living in there. This was a job for my big girl pants (‘undies’ if you are in Australia). Thankfully none of our neighbours visited at that point.

The first step was to empty all the contents of the coup out onto the grass so we could see what was worth keeping and what was old/rotten. This in itself was a big job lugging lengths of wood and countless rusty star poles. Then the removal of glass from the roof!! I know glass – and surprise, surprise under a canopy of trees, a branch had fallen and broken the glass. In their wisdom, someone had laid a glass shower curtain across the chicken wire. The whole thing was a rigged, ready to go death trap.

Luckily for me, Mr P’s middle name is Patience, so he began the delicate operation of removing the glass ceiling!

It’s taken double the amount of time I expected, by the time we wrestled chicken wire from old wood, and rolled decent chicken wire up, threw out pots of white powder (probably bone meal – either that or we’ve just lost a fortune), random black stockings – which I hope were holding up plants – ashtrays and other odds and sods you find in a rickety old chicken coop.

To see the wobbly (yet stubborn) old wooden structure come crashing down was a joyous moment. There was suddenly a lightness, a brightness to that pocket of land that had been so dour and depressing before. I was beginning to get quite excited about knocking down the tin shed and taking my chances with the newer shed too.

It’s good to be on a roll – but it’s just the beginning.

Let the sunshine in!