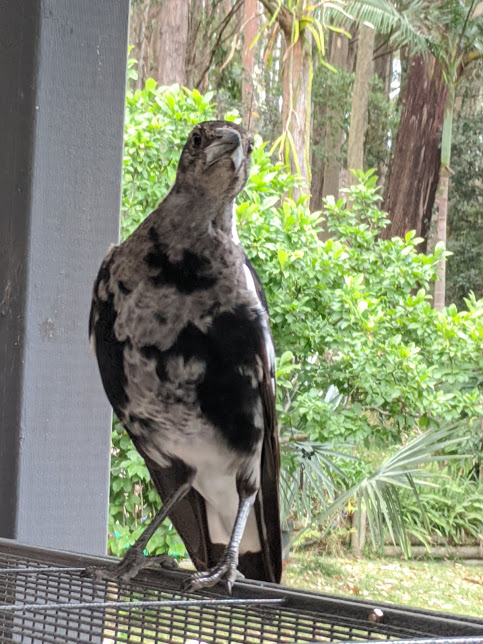 One of the most amazing things about Magpies and Butcherbirds is if they trust you or have developed an attachment to you, they will actually bring their young to visit you. It feels like an honour to be presented with the offspring of a bird that’s been visiting you since it was a tiny fluffy bundle of feathers itself.

Well, that’s what I thought until Scraggy Maggie showed up. The proud parents presented Scraggy Maggie to us a couple of months ago. Mother Maggie looked pleadingly at us. Please love my baby. We know she looks a bit … well … a bit higgledy piggledy … but she’s ours. Scraggy Maggie didn’t have a feather sticking the right way and she looked like a pinto horse in bird form. It was as if Mother Maggie was relieved we accepted her as one of our own because after that Scraggy Maggie just showed up on her own – her parents were off- warbling and frolicking further down the paddock without a care in the world. Free at last!

I thought at first Scraggy Maggie would change colour as she got older – but she hasn’t seemed to so far. Her feathers are a bit tidier these days but that’s about it. She’s quite a ballsy bird too. If we’re not out there with provisions or water first thing in the morning she hunts us down – she literally stalks as through the window or on the back balcony. ‘Oi where’s my breakfast? I can see you in there you know.’ We actually try not to feed her as we don’t want her to get lazy and rely on us. That doesn’t do any wild bird or animal any favours. But every now and then when we are feeding Fergie we’ll throw a few seeds her way.

She’s actually much more trusting of Mr P and has taken food from his hand, but Angus is always glued to my side so I think she is rightfully a bit more wary of him. That said,. she doesn’t fly away, she just creates a bit more distance between us. One of my favourite things about Magpies is their warbling song. They throw their heads back and call out to whoever is in the area. “Come and get it – free grub here.” It’s the most beautiful sound. It’s a good job Scraggy Maggie’s got a great voice because she ain’t much of a looker …lol. There’s probably a song about her – but she’s too scraggy to be a Maggie May.