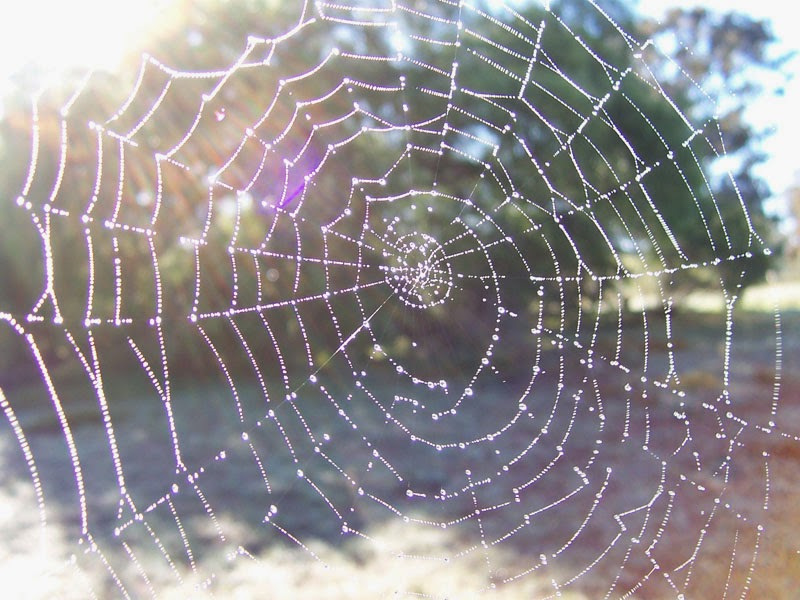 No this isn’t one of my witchy or philosophical conversations, though it is about ‘Spidey’ senses in a way.

I always considered myself an arachnophobe – a gagging, skin shivering, tearful, screaming arachnophobe.

I’m pretty sure my fear of spiders came from a pretty horrific episode of Doctor Who when I was about 3 years old. When I think of it now it was probably quite hilarious with the level of special effects available back then, but the notion of huge jumping, red-eyed spiders must have stayed with me.

All through the years I remember spotting spiders from across the other side of the room, screaming at them, throwing things in their general direction before screaming the house down for help. The laughable thing is – I was living in Scotland back then. I don’t actually know of any Scottish spiders that will kill you.

Fast forward many years later and Mr P took me to Tallow Beach, near Kilcare on the Central Coast in NSW. We had the whole beach to our self for camping. It was so romantic apart from 3 life threatening scenarios – 2 for me and 1 for him.

The first being, I had told him about my reluctance to camp because of these little bottles of gas that power the stoves. As a child I had been in a significant tent fire (I was stuck in the back of the tent as a fireball of flames came towards me (as the result of a gas canister exploding at the front of the tent). The old canvas girl went up in an instant – meanwhile the stepfather (qualified Fireman no less) ended up in hospital after trying to stamp the fire out. My mother ripped the tent apart to grab me out from behind – oh and her hair had caught fire too. I’ll tell you more about that another time.

As Mr P and I sat preparing dinner, I thought how brave I had become sitting with him in close proximity to one of those gas bottles. Suddenly to my slowly unfolding horror, I looked down to see a trail of fire heading straight toward me. My brain could not quite comprehend what was happening. Was this a joke? Apparently there had been a leak and once lit, the trail of fire was somehow attracted to me! Near Death Experience No 1.

The following day we left our tent and supplies to go on a bushwalk. It was stunning to walk in what seemed to be previously undisturbed bush land so we had to take care not damage the flowers and plants beneath our feet. After about an hour’s walking my eye was drawn to spiders up ahead that seemed to be hanging in mid-air – about 5 Foot 2 inches from the ground (yes that’s my height exactly). I became aware that the trees had crowded in around us  and our walking was becoming more and more stooped.

“Where the hell are we going?” I demanded. Forget the romance by this point.

“I just want to get to the end of the headland.” Mr P pointed the way ahead like some sort of ‘my life depends on it’ deranged explorer.

“But the spiders … there’s lots of spiders.” I protested.

“Oh they won’t hurt you – just think of it as therapy.”

“Are they poisonous?” I  need to know. It seems a fair question.

“Well they’ll give you a bite. All spiders bite. But you’ll be alright.”

I was quietly fuming behind him and chanting all sorts of mystical swear words until I made the mistake of stopping to catch my breathe.

If you are a Stephen King fan, you’ll know where I’m heading with this. The trees on either side were all knitting closer and closer together, bowed down to meet each other making a gnarly archway for us to walk under. Sounds kind of idyllic doesn’t it? Except I kid you not, for as far as the eye could see every single one of these trees had spiders hanging from them – big huge fat Orb spiders … not just your teeny weeny St Andrews Cross or some random, non-descript spider … big fat abdomen bulging, orangey looking Orbs.

My skin is rippling in a series of chilled goosebumps. My goosebumps have multiple goosebumps. I feel myself rooted to the spot unable to move forward and too scared to go back.  The gag reflex is strong. The desire to cry is strong. Thoughts of spiders in my hair, across my face, down my back, around my neck all send me into a freak-out frenzy. Their webs are strong, sticky and binding – holding me long enough for them to move in with their spidery fangs. I am cursing the man ahead of me for luring me to certain death!

Suddenly my kind, soothing ‘meditation’ voice kicks in to save me. Deep breathes. Remember your box breathing she says. I obey, happy to have something to focus on other than the Suicidal Halloween scene presented before me.

I make myself move forward to catch up with Mr P who will shortly experience his very own near death scenario when I get him back to base camp!

Then as though some Divine miracle opened up before me Mr P turns around.

“Yeah it’s getting too tangled up here. Impossible to fight your way through there to the headland, we’ll have to try another way.”

He’s … he’s giving up! YAY. I thank all the Gods and Goddesses for this joyous turn of events. Now we just have to get back through the spidery chandeliers of death we’ve already negotiated – and I’m in front.

“Um – you know my sense of direction is terrible. It’s probably better if you go in front.” I try to sound pleasant, nonchalant even. Of course Mr P is always happy to oblige – he knows his woman is challenged in many ways and it’s a good job he’s around to save her (Lol). It’s a great Bush survival tip – always have a leader (that’s not you) – or if that’s not possible – always have a big stick. That way you can wave it in front to disturb any stray webs that want to wrap around your face and throat, or use it to stomp the ground. The vibration will scare away the snakes. All in a day’s bushwalk in Australia!

We get back to our tent eventually and I release a tirade of pent up expletives.

‘But they were more scared of you. Imagine how massive we must have looked heading towards them. They got out the way. They didn’t attack you or drop down into your hair. You walked through all those spiders and not one of them attacked.” Damn him for making so horrific sound reasonable.

In a way, perhaps he was right. Exposure therapy of sorts. After all nothing could ever be so horrific again.

Hard to believe after that experience but I still married the guy! Even harder to believe, we now live on a property surrounded by bush. So those beasties are out there right? Everywhere …

In another turn of events – we have a BBQ – with a 9kg gas bottle! Yup you’ve guessed it. That’s the thing I’m more afraid of these days.