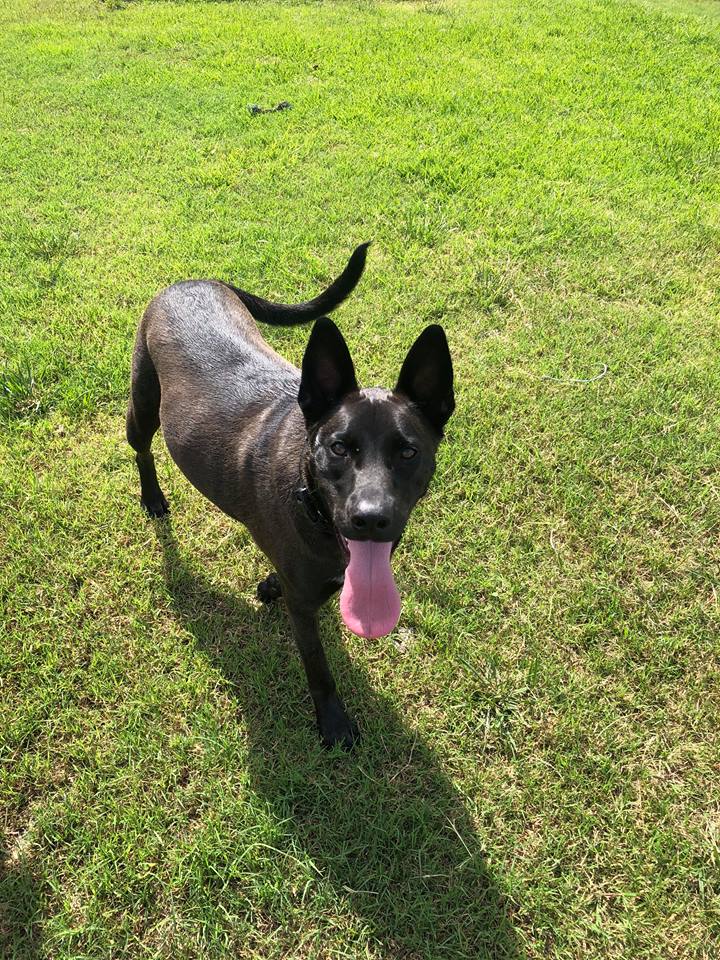 Next door’s chickens decided they wanted a change of scenery today. We found them pecking around in the long grass under the fruit trees quite oblivious to the ducks who had made camp further up the bank near the Macadamias.

I had a Reiki client and Peter was on a call. Angus was asleep in the house so all was well. Tranquil you might say.

Two hours later I was standing on the deck sipping a cool glass of water. With my client gone I wanted to take a few moments to give thanks for the energy that had flowed and the healing that had taken place. But my eye was drawn to Angus who had somehow found his way down to the fruit trees.

What is he doing? I watched in amusement as he seemed to be doing his downward facing dog routine. To my horror, I realised he was crouched down in front of a huge orange ball of feathers. Oh my God, Angus. Please – not the chickens …

I mean who could blame him? It’s only instinct after all …’Peter, that’s a chicken down there,” I yelled over my shoulder.  “I’m going down.’ My heart was in my mouth. I didn’t particularly want to see the gory innards of a chicken, but if my boy had acted as nature dictated then I wanted to be the one who dealt with it. I felt a strange maternal urge to want to ‘protect’ Angus from what he had done – even though the notion repelled me.

I prepared myself for the worst case scenario. Guts, feathers, a glazed eye and lolling head as Angus tore into his kill. My heart was pounding …Oh please Angus, please don’t be a killer … I don’t want to have to be that neighbour that turns up holding a murdered chicken in their arms and a gleeful panting dog by my side, feathers still in mouth.

As I approached, Angus turned and wagged his tail and then he bowed down in front of the chicken again. He leant forward with his nose and oh so gently nudged the big orange bird. She responded with a few disgruntled clucks before looking at me, blinking.  Angus backed away. He was doing all his best ‘play bow’ moves and was so gentle with the clucky girl it took my breath away. He cocked his head when she clucked, he gently reached out with his paw and backed away again. Every part of him was saying ‘play with me’.

The chicken stared up at me and then resumed her clucking as if she was tutting at the intrusion. I didn’t allow relief to sweep through me just yet though. I picked her up.

Now I should explain something here. I have never picked up a chicken in my life. Never. I’ve never even touched one when I think about it. Somehow nature took over though. Before I knew it I had the chatty girl cuddled into me and I swear she was happy. She chatted away as I strode up to the house. Better just giver her a once over before I take her home I thought.

A couple of weird things happened at that moment. A huge whoosh of love for Angus. My boy just wanted the chicken to play. He was so gentle with her. I mean, I have never seen a dog behave like that with a bird – and especially when those particular chickens normally flap and shout at him from across the boundary fence.  That’s got to say something about his gentle nature. Of course, I’m not naive – at any moment he may have ‘accidentally’ stunned her with his massive paws – but his ‘intent’ was not to kill her. But more than that – I felt a huge surge of emotion for this big fat clucking hen. She seemed to actually enjoy being lifted up and carried.  She had some weight to her too. Out of nowhere, I felt this huge affection – for a chicken! For goodness sake …

So turns out she was absolutely fine. She loved her adventure hanging out in my kitchen until I was 100% sure she was fine.  Angus hadn’t harmed so much as a feather and the bird seemed totally fine. Fearless in fact. Satisfied all was well I took her back home. ‘Off you go now’ I said gently guiding her on her way. She called out to her fellow hens who all came rushing to see her – all eager to hear about her adventure no doubt.

Angus looked up at me with his great tongue lolling out the side of his mouth. ‘Good Boy Angus. You’re a very good boy.’ And for the second time that day I thanked the Universe.