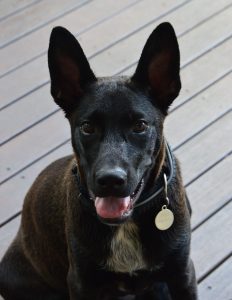 Then as I grew, I learned more of the Kelpie’s ways. Growing up in Scotland there was no shortage of old grannies telling stories of Kelpies and Goblins. Fantastical, magical and supernatural stories are all part and parcel of a Scottish childhood.

Kelpie, or water kelpie, is the Scots name given to a shape-shifting water spirit inhabiting the lochs and pools of Scotland. It’s usually described as appearing as a horse but is able to adopt human form. Some accounts state that the kelpie retains its hooves when appearing as a human, leading to its association with the Christian idea of Satan as alluded to by Robert Burns in his 1786 poem “Address to the Deil”.

Almost every sizeable body of water in Scotland has an associated kelpie story, but the most famous is of course Nessie in Loch Ness.

And then there was my boy Angus! He is a Kelpie X but I think that just adds weight to his shapeshifting abilities. Some days I look at him and he is very Kelpie/Cattle Dog like – other days I see a different dog altogether.  As a pup, his glossy black coat does make me think of Black Beauty or some young sleek colt of a stallion. Other times he looks like a black spring lamb. As far as his personality goes – well let’s just say he is a little Kelpie minx by nature.

I realised I was going to be talking a lot about Angus on these pages, so I decided to give him his own space to live on the website. I hope you enjoy his Kelpie Capers as much as we do.