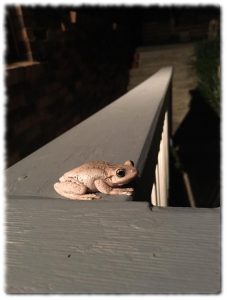 Our family have always had a thing about frogs. We just love them in all their different shapes and sizes. Since my mother passed away they’ve become symbolic that her spirit is nearby watching us. To some of you that may sound weird, but I’m sure there are many out there who understand those symbols and signs we receive from our loved ones. Well it’s frogs and dragonflies for our family.

I think it started when my little brother triumphantly brought home a haul of frog spawn from the woods on the edge of the fields where we grew up. The triumph was largely due to the fact the beautiful woodland and farmer’s field had been sold off to build a new road and houses and building was imminent. It was heart breaking. Why dig up nature and destroy all that habitat for the sake of more concrete? (Well d’oh I know the answer of course – but it still sickens me.)

So, while we know you should never remove frog spawn from its home, my brother did what any self-respecting animal lover and conservationist would do. So muddy pail in hand and the biggest smile on his face, that spawn was introduced to its new home in the back pond of Powfoot Road.

The joy these frogs brought to our family was something to behold. They singlehandedly united a mother, with her three children and then latterly my own daughter would delight in catching them and bringing them indoors to show her gran. Over the years we realised there was a frog who was totally antisocial and lived in one of the other ponds all on his own. He seemed happier that way and it amused us no end. We felt we could relate to him somehow.

So you see, there were so many life lessons and shared experiences wrapped up in those little frogs. They represent happy times.

You can imagine our delight when Toni (that same little girl that ran proudly to show her gran the frogs she’d found) spotted a frog sitting right next to her when she was outside during our first week at Lorikeet Lane. She shouted for me to come and have a look and I could still see that excitement, and I could see she too felt it was symbolic.

He was a beautiful cream little chap with huge suckers on his feet. He was sitting on the veranda and it was late at night. But we had no idea what kind of frog he was.  Toni took a photo and uploaded it to Facebook where he became a social media sensation. Was he a Litoria Splendida? (A what?) Ah – a green tree frog … hmm no, don’t think so … someone suggested Cane Toad and we should kill it immediately – which upset both Toni and myself no end – what an insult to this gorgeous little guy. A Bleating Tree frog? A Brown Tree frog? Nope … The answer came from a friend who obviously knew her frogs. At last – A Peron’s Tree Frog. I looked up all the features and behaviours and yes – it was a fit. These little guys love to sit beside windows at night because the light attracts the moths and bugs. This smart frog can feast all night long on the little, winged beasties of the night.

So much pleasure from one little frog – it was just like old times.