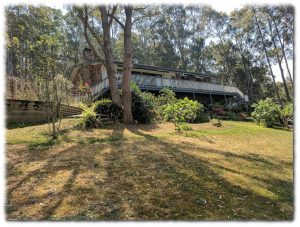 I guess one of the things that is so special about this place is the fact it’s the first house my lovely Mr P and I have owned together. Having both come from previous marriages, previous lives, we found ourselves renting as we worked out our next move in life. Funnily enough, we both seemed to be at the same stage when we met. I lived in Randwick and he lived in Naremburn (yeah the other side of the bridge people … ha). So we were merrily renting our own places and then it became obvious we were spending all our time in one place, so I gave up the rental in Randwick. My daughter had already left home by that stage but there was always the proviso if she needed to return ‘home’ that there was room for her too. She didn’t have any other family in Australia and it was important to me that she still had a place to call home. The boys were living with their mother at this stage, though they too had a place to call home if they wanted it.

When I look back there was so much to be mindful in those early days. Boundaries to set, relationships to negotiate and so much care to be taken with our children and how we ‘integrated’ all our new lives. And of course the emotions of having teenagers who had grown up in so many ways, yet still needed us as parents in their lives.

So our home in Naremburn was really a home where we tried to bring it all together in as caring a manner as possible – a home where we worked it all out, to see if it could all fit. And gradually, gently and respectfully, we figured it all out together. I remember Naremburn still felt like Peter’s house though. I didn’t even know how his convoluted music system worked.

Peter had never made any secret of the fact he wanted to work and live in the UK. I couldn’t believe it when he first brought the subject up. Here was a guy I actually liked – he had his own hair and teeth – he had a brain – and he was kind, gentle and very attractive … what could go wrong? Oh yeah, he wants to live on the other side of the world.  Damn.

It may seem odd that someone from Scotland should take the idea of relocating ‘back home’ so badly, It had taken many years for me to feel at home and reconciled with living in Australia (not to mention a lot of money between various residency applications for a whole family, school fees, flights back forth to the UK – we’re talking thousands and thousands over 10 years). It had been a hard road but we were here living in Sydney – loving life. I had already been through the painful decision of where life should be (which included a few months back in Scotland when my mum was ill). I had got to the point I was living with that decision and embracing life. Of course, when you love someone, you want to see their hopes and dreams come true. So off we toddled to the UK. There was some serious pain wrapped up in that decision as you can imagine. I didn’t want to leave my daughter – she didn’t want to come. Should I let Peter go on his own? Maybe we could just see where we were in two years? But Peter wasn’t going to go if I didn’t come. I didn’t want to leave the life we had because I knew it would never be the same again. So many tears were cried. But we did it. The agreed two years turned into five years – and that translated to three more houses. Five years of rentals using other people’s furniture and not being able to put your mark on a house that wasn’t yours.

And yes – on the flip side – it was five glorious years connecting with family and friends who hadn’t been able to make it for a visit to Australia.

When we did eventually come back to Sydney we were living in Air B&B for a few weeks until we found somewhere to rent. Again this was the place we had to bring it all together from furniture in storage to personal effects that were being shipped back from the UK. It felt once more like we were putting pieces together, trying to figure out our next move.

Suffice to say after all these years I was so over moving house. So over not having any roots. So over not living in a place where we couldn’t hang pictures on the wall. The travel was fantastic, seeing family and old friends was beyond fantastic (and heart wrenching all over again to leave) but I had such a need to have a home we could call our own.

And there it was. Lorikeet Lane.

The house itself needs some TLC. It’s four bedroomed – but not large by any means. It’s perfect for two people with three grown-up children. I think for both of us, it was the fact the house is set on two and a half acres, surrounded by cows and horses and bellbirds. What that translates to for us is freedom. Freedom to have a dog, to have chickens, to plant natives and to be living in nature. For me, it means I can hang pictures on the wall. Pictures of our families, our memories and our lives together. It means I can have a writing desk looking out across our property and a Reiki studio for healing work. For Peter, it means a double garage, and endless gardening to enjoy – not to mention a ride on lawnmower.

So you see, it’s been quite a journey to get here. I felt compelled to share, so you had some inkling as to what this place means to us. I hope you enjoy the rest of the journey with us as we turn this house into a home.