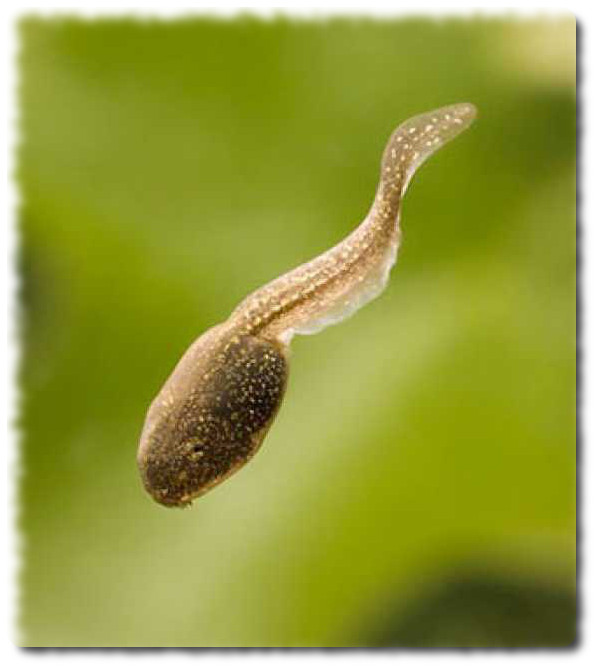 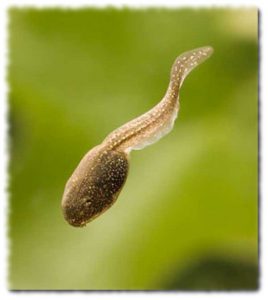 I may have mentioned that we have a ‘clumps’ of frog spawn in one of the ponds. I have since read a great deal about their life cycle and have been keeping an eye on them, cheering them on from the peripherals. Peter had pointed out that he thought he saw movement in one of the clumps and when I went out to inspect this new phase I was slightly worried. I could certainly see movement, but it looked like the movement was coming from under the eggs rather than from the tiny black dots themselves. I know the newly ‘hatched’ tadpoles sometimes eat the remaining frog spawn if there is not enough in the way of food – but there was no shortage of food on the surface of the pond. There was something strange about this movement that had me puzzled.

This morning during my daily check on them, I got the fright of my life. I could see quite clearly one, then two, very large tails under the frogspawn. They were so large I thought for a moment there must have been fish in the pond that we just hadn’t seen until now. They looked like huge black fantails. Damn, they were going to eat all the frog spawn. And then the two tails turned into two of the largest tadpoles I have ever seen. I would say they measured about 3 inches in length. Talk about tadpoles on steroids. I ummed and ahed about what to do, but I’ve decided I must let nature take its course and leave the tadpoles in the pond even though they seem to be a mutated version of the cute little tadpoles I remember from my childhood. I wonder if there will be any frog spawn left in the morning. Oh well – I’m sure I’ll love these massive frogs whatever they turn out to be.

Time to do some research I think.