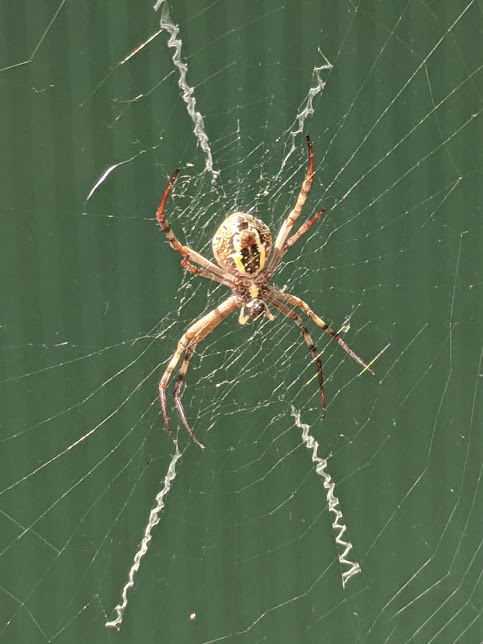 In one of my earlier posts, I mentioned my fear of spiders and made mention of the fact I had grown up in Scotland – and there was no such thing as a Scottish spider that could bite or kill you. Mr P informs me every spider can bite (even the Scottish ones) but my experience would suggest otherwise. I cannot recall ever having bitten by a spider anywhere in the UK and definitely not in Scotland. Like everything else in Scotland – the spiders are friendly. I mean why else would they rush towards you across the floor or ceiling when they see you?  ‘Come back fren’ it shouts as you scream and run in the opposite direction.  I digress!

The astute among you will have noticed the name of this blog is – ‘The Scottish Spider’. A bit like me though, this Scottish Spider calls Australia home. It is the most beautifully named Orb – the St Andrews Cross. I’ll give you three guesses as to why it may be so-called. This particular specimen has taken up residence on the side of the shed I was planning to knock down but she looks so happy there right now.

The St Andrews Cross design on the web is due to the construction of bands of silk forming the arms of an X-shaped cross, (similar to the one upon which St. Andrew is traditionally said to have been crucified).

Juveniles of this species sometimes build a spiral-shaped pattern of silk. These web decorations or stabilimenta, (bands in this case) are thought to increase the volume of prey capture, however,  it is also thought that these decorations help protect the spider against predators. I guess because when this spider is resting it stretches its legs out in this x shape – which probably makes the spider look bigger.

These spiders are not aggressive to humans and their bite (if you were unlucky enough to be bitten) does not seem to be toxic or be cause for alarm. With that in mind, I’m quite happy for her to continue wrapping up her dinner,  and hanging out for the day on my shed.