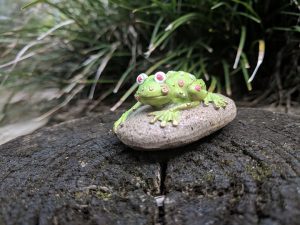 As you all know by now, we have a thing about frogs here. We feel so lucky living here because we are surrounded by the little croakers and we either hear them or see them most evenings. I know for sure we have 3 different varieties on the property though I have yet to ‘catalogue’ them.

Even as I write this, there is a solitary Striped Marsh Frog sending out his ‘tok’ call (imagine the sound a tennis ball makes against the racket)  from his prime floating position in the water.  For me, there is nothing more relaxing than being surrounded by such sounds.

I think I may also have explained how our family have always inadvertently become involved in ‘saving’ wildlife and animals. It was my brother who rescued a whole bucket load of frogs from the swamp in the woods where we lived in Scotland – before it was destroyed by diggers. These frogs and many generations of frogs have lived very happily at our old family home ever since.

If only we had my brother and his little bucket and spade now.  Sadly, since moving into the property we have discovered that a controversial rail maintenance facility has been approved not too far (as the crow flies) from where the back of our property ends. It won’t impact us on an immediate level but as far as the community and environment are concerned this is a huge blow.

This project was approved despite the area being wetlands (and flood-prone) and despite the area being home to no less than 4 endangered species including a newly discovered ‘Mahoney Toadlet’.  It’s so frustrating!  This development is going ahead despite a more suitable location being found just a few kilometres up the road and despite the community investing $3000 in an independent environmental report to prove the rare froglet lives there. As if threatened or endangered species are not enough reason to rethink the location of the rail maintenance facility, there are Platypus in the area.  I have lived in Australia 16 years now and I have still to catch sight of this elusive creature.  The threat to a species is one thing – one very big thing – but the destruction of the only known habitat is quite another.  No one is happy about this and understandably so – the whole thing is playing out like that iconic Aussie movie ‘The Castle’ … “it’s the vibe of the thing” (i.e, the whole thing stinks).

Luckily we have a retired ACT* Government employee in the family (with Environmental expertise) so last time we caught up I mentioned the situation to her, hoping she had some advice that would help us stop the whole thing in its tracks.  After some discussion about what was at risk, my sister-in-law was able to point us in the right direction – just to be sure everything that should have been done was done to avert the potentially disastrous impact on the wildlife and supporting vegetation.

As she pointed out, the Impact Study highlights the two most vulnerable species are the recently discovered Mahony’s Toadlet and the nationally listed Wallum Froglet. Both are restricted in distribution to relatively small areas and require acidic swamp areas for breeding. The recovery plan and the listing under the National Environment Protection and Biodiversity Conservation Act (EPBC )set out these conditions for Wallum’s Froglet.  However, the more recently discovered Mahony’s Toadlet doesn’t appear to be listed under the national legislation at all – even though it seems to have a narrower area than the other and also requires the swamp habitat for breeding.

The swamp areas in the planned development are a key point to try to halt the development. Page 29 of the SIS talks about the vegetation/geography of the development area and while it does appear there is potential breeding habitat in the area, the type of development is likely to impact indirectly through pH changes and possible pollutant runoff.

Which begs the question, ‘Should the vegetation itself should perhaps be covered by a protection plan under the EPBC Act?’

So what to do? Well for my part (though late to the party) I have contacted the ‘Save Our Species’/Threatened Species at the NSW Government – Office of Environment & Heritage as well as the Environmental Compliance Government Department – just to ensure the due process has been followed. That’s just for starters. So let’s see what comes back