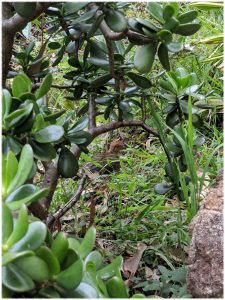 It’s probably hard to see in this picture but if you zoom to the centre you’ll see a wide-eyed little chick with brown fluffy tufts on her head and a useful looking beak. I say ‘little chick’, she’s fairly large by ‘chick’ standards. I discovered her yesterday foraging for food amongst the leaves in our backyard. After some research, I discovered she was an Australian brush turkey hatchling. We’ve been away for 2 weeks so she may have hatched while we were away. We had heard something rustling around in the leaves before and wondered if it was our resident Blue Tongue Lizard (we’ve since named him Russel as the rustling of leaves always signals his appearance) but perhaps it was this little cutie, or it’s mother looking for a suitable mound for her eggs.

There are many people who don’t like Brush turkeys. They do tend to tear up the garden on their hunt for food and I have heard that in the absence of a female the male will single out your black chickens for some special attention, but they are native to Australia and I’m happy to let her be. The odds are stacked against her as it is with snakes and a Guana (though we’ve still to spot him) on the property.

Brush turkey chicks look similar to quails, with plain rich brown feathers over their entire bodies. As they mature they lose the feathers on their heads and necks, where the bare skin turns a deep pink colour. It’s at this point they take on that turkey look and become less ‘cute’. In fact, they are quite ugly as adults but hey that’s life for most of us.

So I turned to trusty McGoogle to do some research and as I read about their breeding habits I couldn’t help but feel a bit of respect for the female bird.

Using vegetation gathered from the forest floor around them, male brush turkeys build a large and distinctive ‘incubation mound’, which can be up to 4 m wide and up to 2 m high. I have to confess if there was a such a mound on the property I would have missed it as it is all a tad overgrown at this stage.  A female will then lay 18-24 white eggs in the mound, with intervals of two to three days between the laying of each egg.

Female brush turkeys  ‘shop around’ before adopting a mound to lay their eggs in. They assess the quality of the mound since it reflects the quality (attentiveness and experience) of the male who made it. How sensible is that? A good quality mound will have several females laying in it, while poorer quality mounds may have only one or no females laying. Females may also lay in more than one mound each season to spread the risk. (Take note men out there – you have it easy.)

As the vegetation in the mound decomposes, it gives off heat which warms the eggs. The optimum incubation temperature is 33-35°C which the male brush turkey maintains by removing and adding layers to the mound. Apparently temperature regulation is the only assistance the parents provide to their offspring. The young brush turkeys hatch after about seven weeks, amazingly fully feathered and able to run. They dig their way through the layers of the mound and into the open air. After that, they are totally on their own which is why I’m probably feeling protective of our little hatchling.

If I see her again I may give her a name. She looks like a Matilda to me.